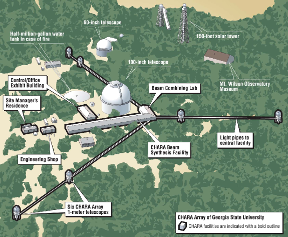 The CHARA Array is an optical / near-infrared interferometer located on Mount Wilson, CA. The facility is composed of six 1-meter telescopes, a beam synthesis facility, and a beam combination laboratory. Using the longest 331 meter baselines CHARA can resolve objects as small as 0.2 milliarcseconds (mas) at visible wavelengths and 0.5 mas in the near-infrared.

A table summarizing the instrument availability, capabilities, and sensitivities is available on the Applying for Observing Time page.

The CLASSIC and CLIMB beam combiners of the CHARA Array are open air, aperture plane, broadband, single spectral channel instruments optimized for sensitivity. CLASSIC is the original two beam combiner used for the first science at CHARA, and it still has the faintest magnitude limit. CLIMB is a three beam expansion of CLASSIC that also provides closure phase measurements. 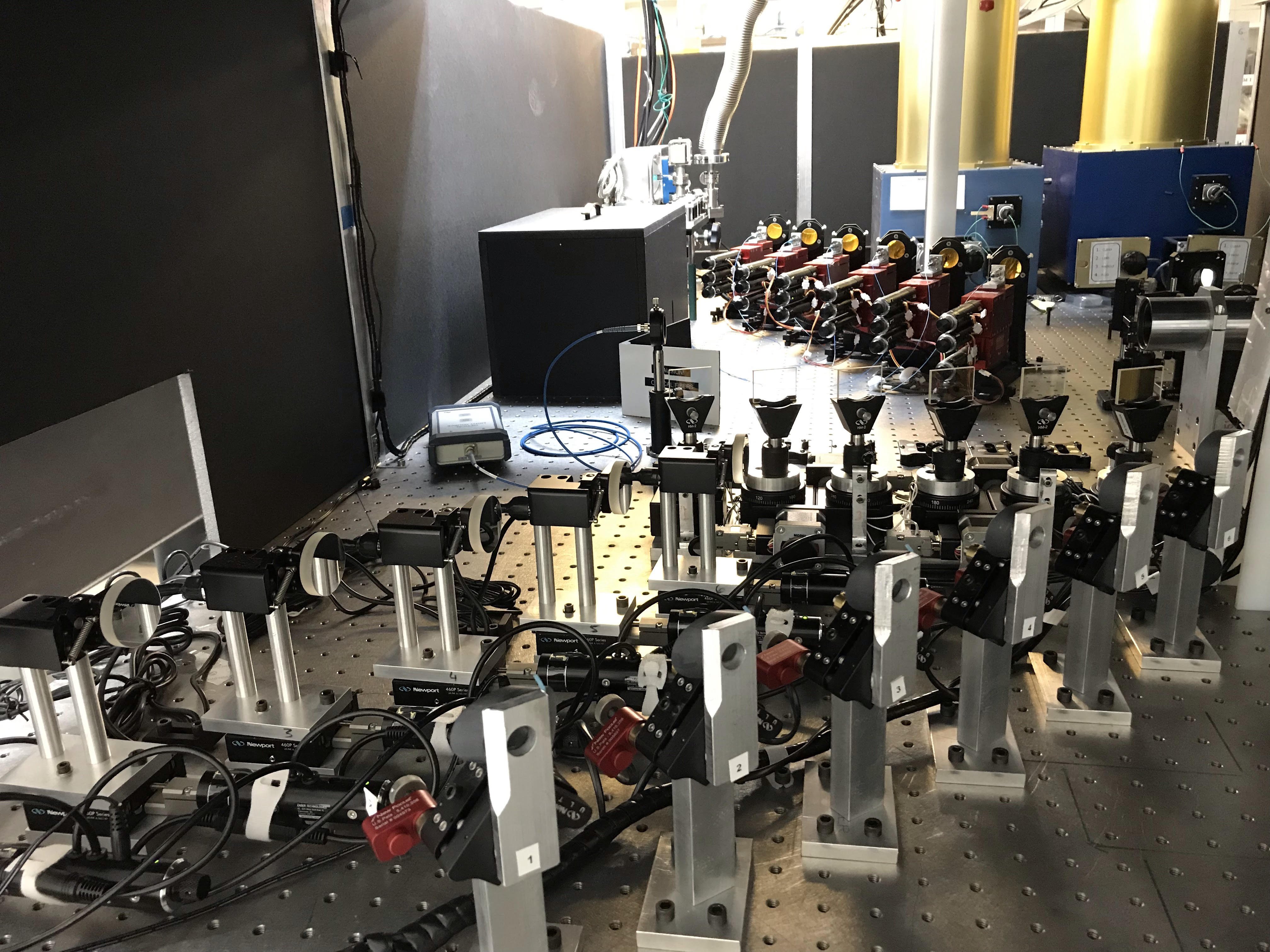 The upgraded MIRC-X and recently commissioned MYSTIC beam combiners at the CHARA array combine the light from all six telescopes simultaneously.  MIRC-X disperses light across several spectral channels and operates in the near infrared J and H-bands.  MYSTIC operates at longer wavelengths in the near infrared K-band. MIRC-X/MYSTIC can be used simultaneously to create images of stellar surfaces and circumstellar disks.  The precision closure phases are well suited to detecting faint binary companions. 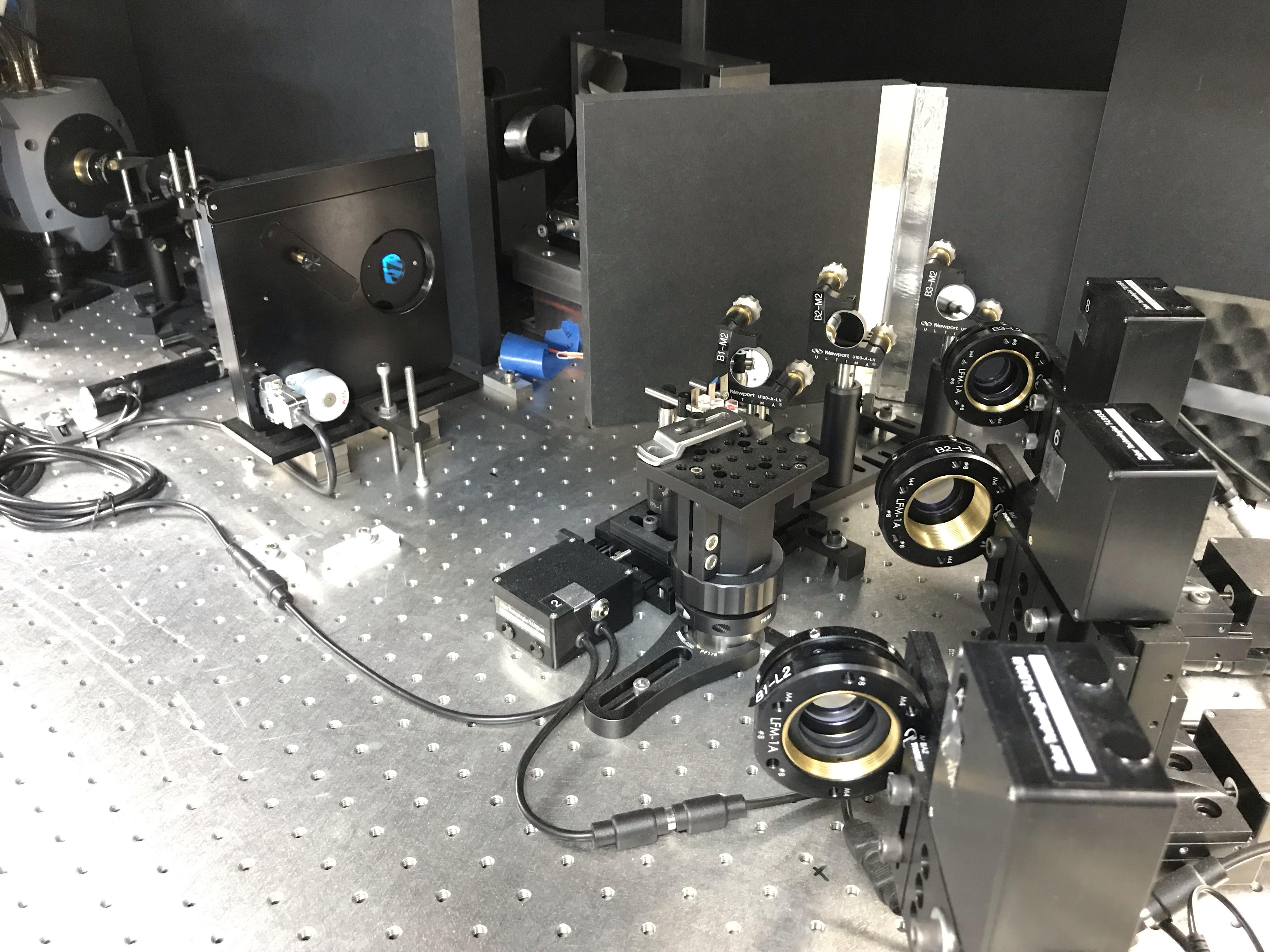 PAVO is an integral-field-unit for measuring spatially-modulated fringes in the pupil plane.  It spectrally disperses light over a 630-950 nm bandwidth (R = 30).  PAVO can combine the light from two to three telescopes. On the longest baselines, PAVO can achieve a resolution of 0.2 mas.

SPICA is a new visible beam combiner being developed by Denis Mourard and collaborators. It will combine all six telescopes at the CHARA Array. SPICA will be assisted by a near-infrared fringe tracker. The goal of the SPICA project is to provide a large and homogeneous set of stellar parameters across the HR-diagram. The survey aims to measure the angular diameters of 1000 stars. 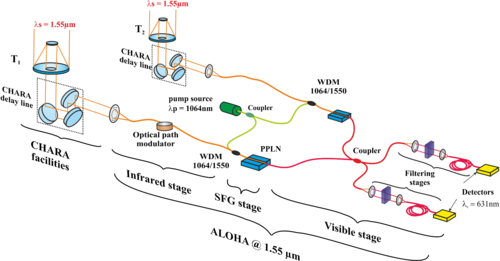 The ALOHA project is under development at the CHARA Array.  ALOHA uses nonlinear optics that act like a mixer in a radio receiver, to shift the infrared radiations emitted by the observed astrophysical source to the visible spectral domain. This way, the light beam is more easily processed by mature optical devices and detectors. 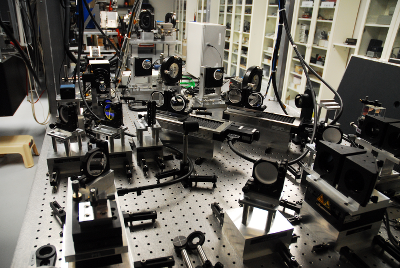 JouFLU is a two telescope beam combiner operating in the near infrared K’ band (lambda = 2.20 microns) that was available from 2002 to 2019.  JouFLU spatially filters the light through optical fibers to produce high precision visibility measurements. 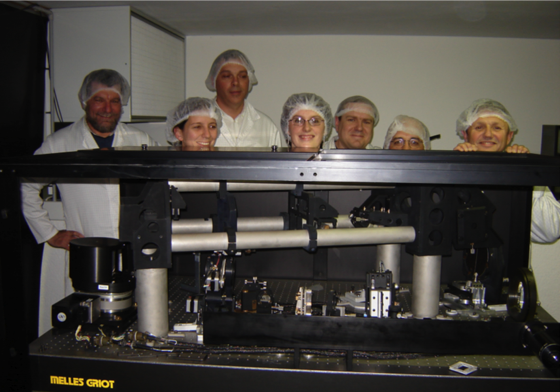 The Visible spEctroGraph and polArimeter (VEGA) was installed in September 2007 at the CHARA array. VEGA measures spectrally dispersed interference fringes, providing a spatial resolution of 0.3 mas and spectral resolutions from R = 6,000 to 30,000 over a wavelength of 480-850nm. VEGA was decommissioned in December 2020 to make way for the next generation optical, 6-telescope combiner SPICA.