For more information on the math and physics behind the data reduction process, see the PAVO instrument paper (pdf here).

CHARA Data are organized in the archive by beam combiner, then date. For example, all raw PAVO data for UT night 2018 Feb 26 is in the directory /dbstorage/PAVO/2018/180226. If you do not know on what nights a target was observed, run the script find_pavo_target HD_number. This will read through the headstrip files (see below) and find on what nights the target was observed.

It is important that the HD number for the star be in the format HD_XXXXX, because the find_pavo_target script looks for the target in the same format as it appears in the headstrip file.

Setting up the PAVO environment

The PAVO data reduction software is written in IDL. The command pavo_idl will start IDL and load the astrolib IDL library and the PAVO software library. When you start IDL in this manner, you should see the following startup message:

The first part of the data reduction process is to run the headstrip.pro program for the night of data you wish to reduce. We have already done this for all PAVO data currently in the archive. This program reads the header for each data file in the directory and outputs a text file in the data directory (headstrip.txt) containing the following information:

If you notice any discrepancies between your observing logs and the headstrip file, please discuss them with CHARA Data Scientist, Jeremy Jones before proceeding with your reduction as the headers on the data may need to be modified. 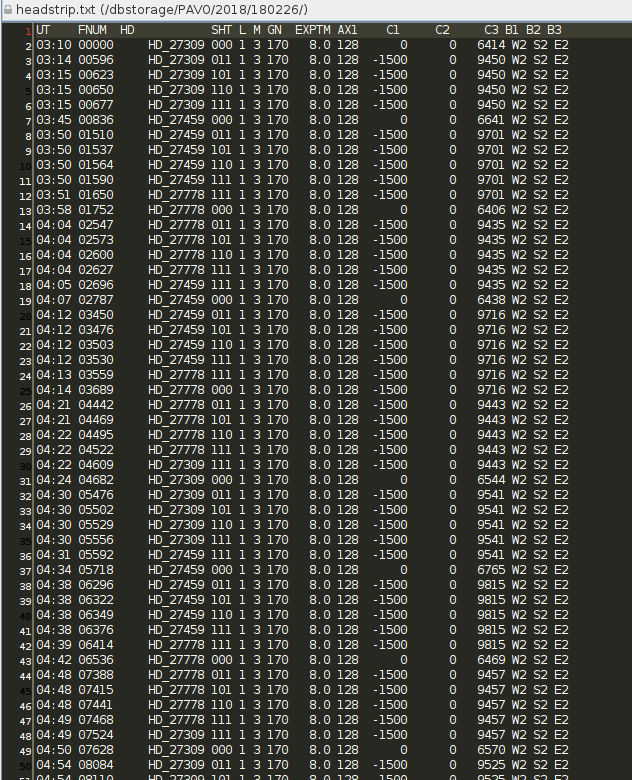 For this tutorial, we will reduce the data for one target and its two calibrators. These data were taken on UT 2018 Feb 26 with the S2-E2 baseline under decent seeing conditions (10.6 cm mean seeing for the night). Six observations were taken of the target, HD 154494, which is a V=4.8 magnitude star of type A3V with an estimated diameter of 0.38 mas (JMMC Stellar Diameter Catalogue). Four observations were taken of each calibrator. Both calibrators, HD 151862 and HD 154228, have V-band magnitudes of 5.9 mag and are A1V-type stars with estimated diameters of 0.22 mas.

The first step of the reduction process that you will be running is processv2.pro. It can take several hours to run, so be prepared to wait.

Processv2 requires the following to be set:

In our example, we will call the processv2 command like this:

Options that can be set while running processv2 are:

The outputs from processv2 are: 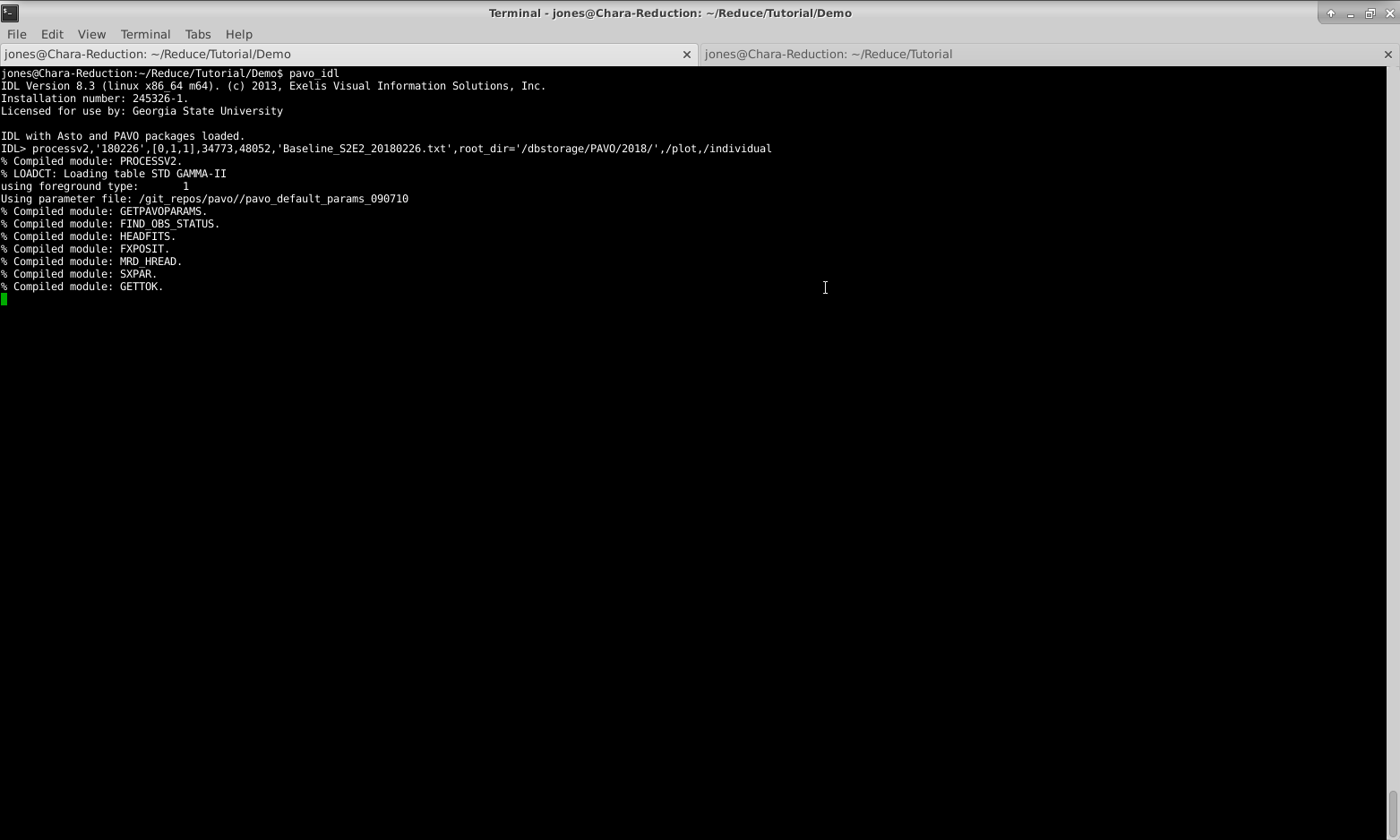 The solid line is flux vs. wavelength after correcting for offset. The dashed line is the calibrated inflection point of the PAVO filter.

Example of the power spectra you should see during processv2: 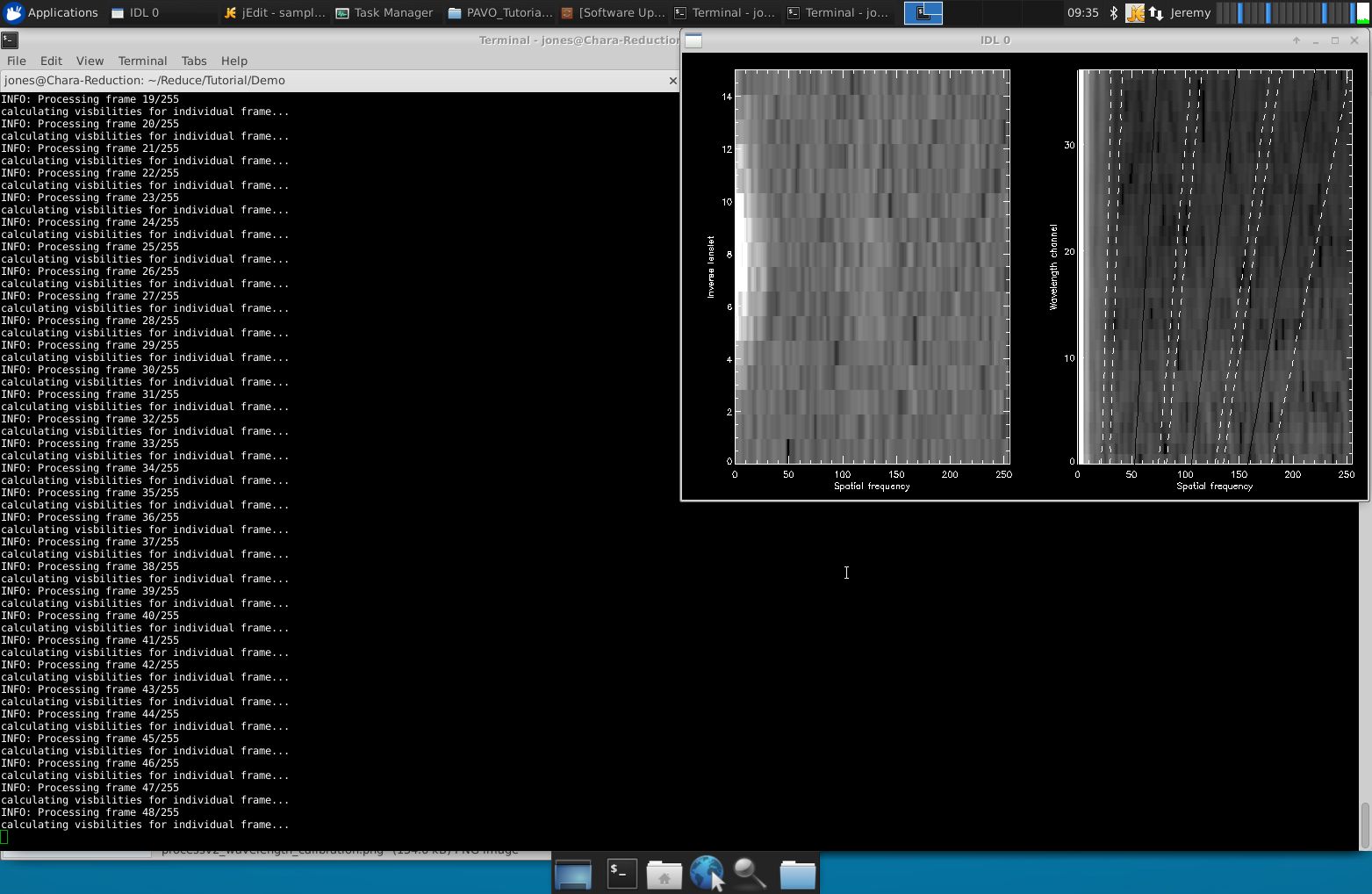 This is a good first quality test of your data. You should see a signal in these plots for your science data.

Note: processv2 cannot process multiple baselines in one run. For example, if S2-E2 was used for the first half of the night and E2-W2 for the second half, processv2 cannot be run for the whole night. It should be run twice (once for the S2-E2 data and once for the E2-W2 data). Another option is to run processv2 separately for each target set (a target plus its calibrators) as we are doing in our example for HD 154494 and its calibrators.

This program reduces level 0 data (the .pav files) to level 1 data (reduced, uncalibrated data). l0_l1_gui takes the .pav files and performs an automated outlier rejection as well as enables the user to manually reject bad sections of data. This program can only be run if /individual is set when running processv2.

Create a text file that contains a list of the .pav files you will be reducing. To do this, exit the IDL environment and run the command ls *pav > yourlist.list. In our example, I have named the list file HD_154494.list. Because of how the ls function orders filenames, the items in your list may not be in chronological order. While l0_l1_gui.pro does not require the list to be in chronological order, you may find it easier if you reorder the list. 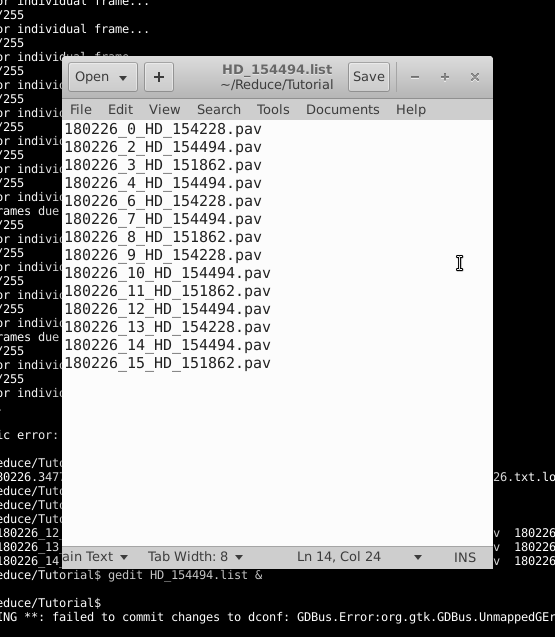 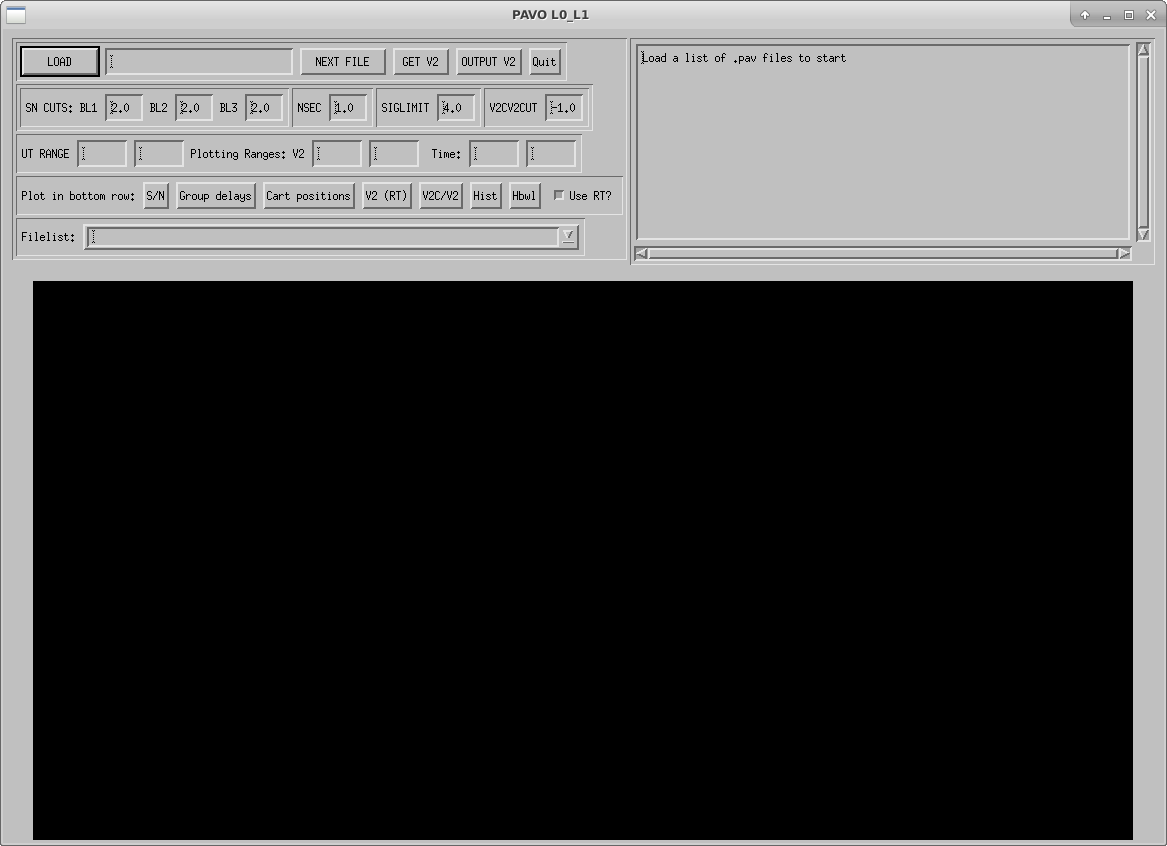 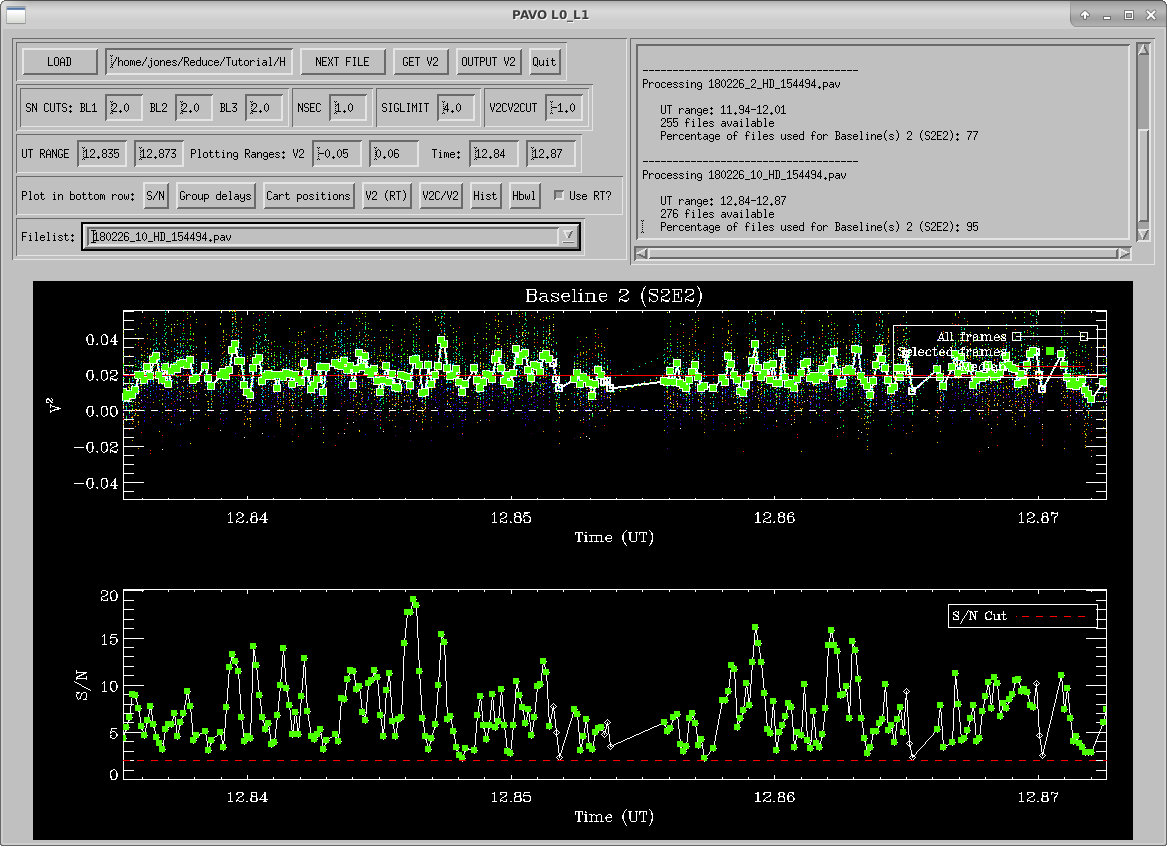 l0_l1_gui will start showing results for the first .pav file. The top panel displays UT time vs squared visibility. The bottom panel displays UT time vs. the signal to noise ratio. This S/N is calculated in real-time and is the value you see in the PAVO server during observing. In the top panel, each wavelength is shown as colored dots, and the white squares are the average V2 over all wavelengths. Green squares are frames which are kept with the current rejection criteria. Outlier rejection is based on three criteria: S/N, seconds after the lock on the fringes is lost (NSEC), and deviation from the mean in sigma (SIGMA LIMIT). The default values should be fine in most cases. S/N cuts are the most appropriate to be adjusted if data is particularly bad or good. The window in the top right shows what percentage of recorded data files will be used for each baseline given the current rejection criteria. The plot on the bottom panel can be changed by clicking one of the options on the “Plot in bottom row” line. 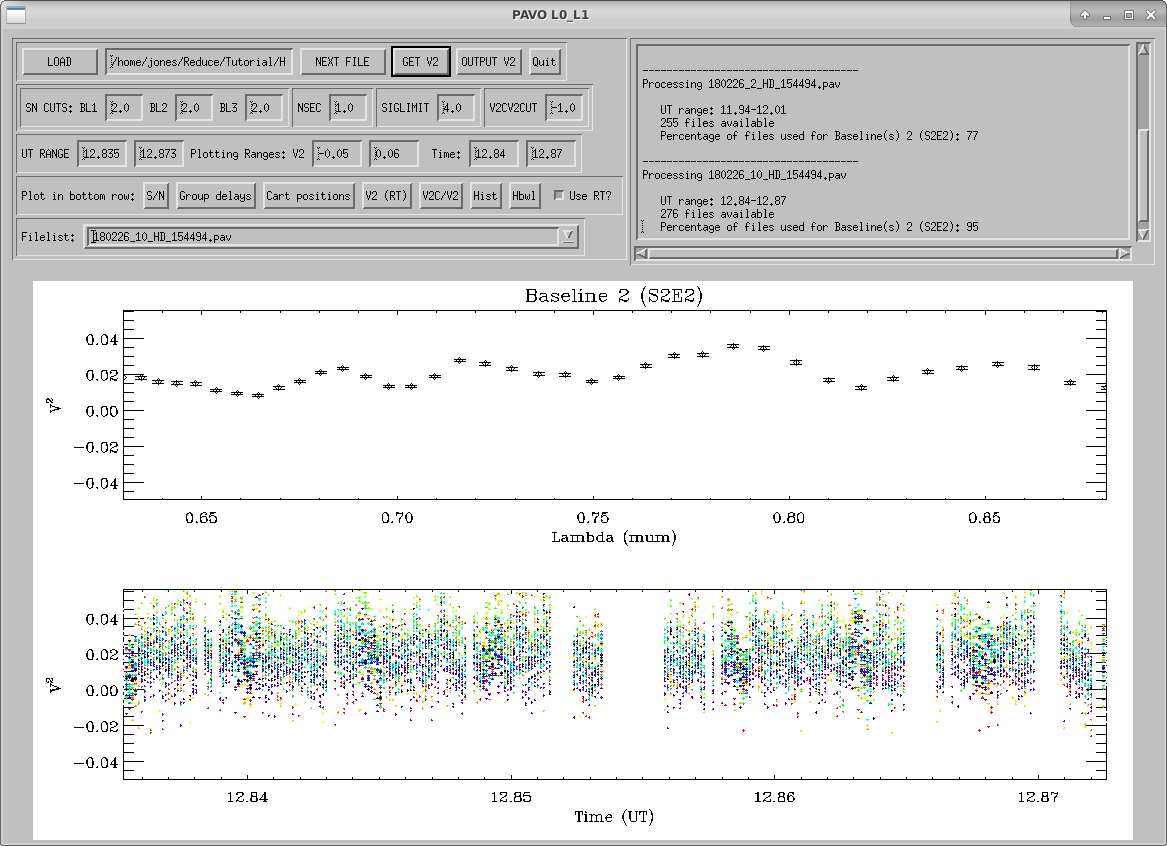 Then, press OUTPUT V2 to save your work. This will create an entry in the output file (yourlist.list_l0_l1.res) and some additional files that are used in the next step of the reduction. 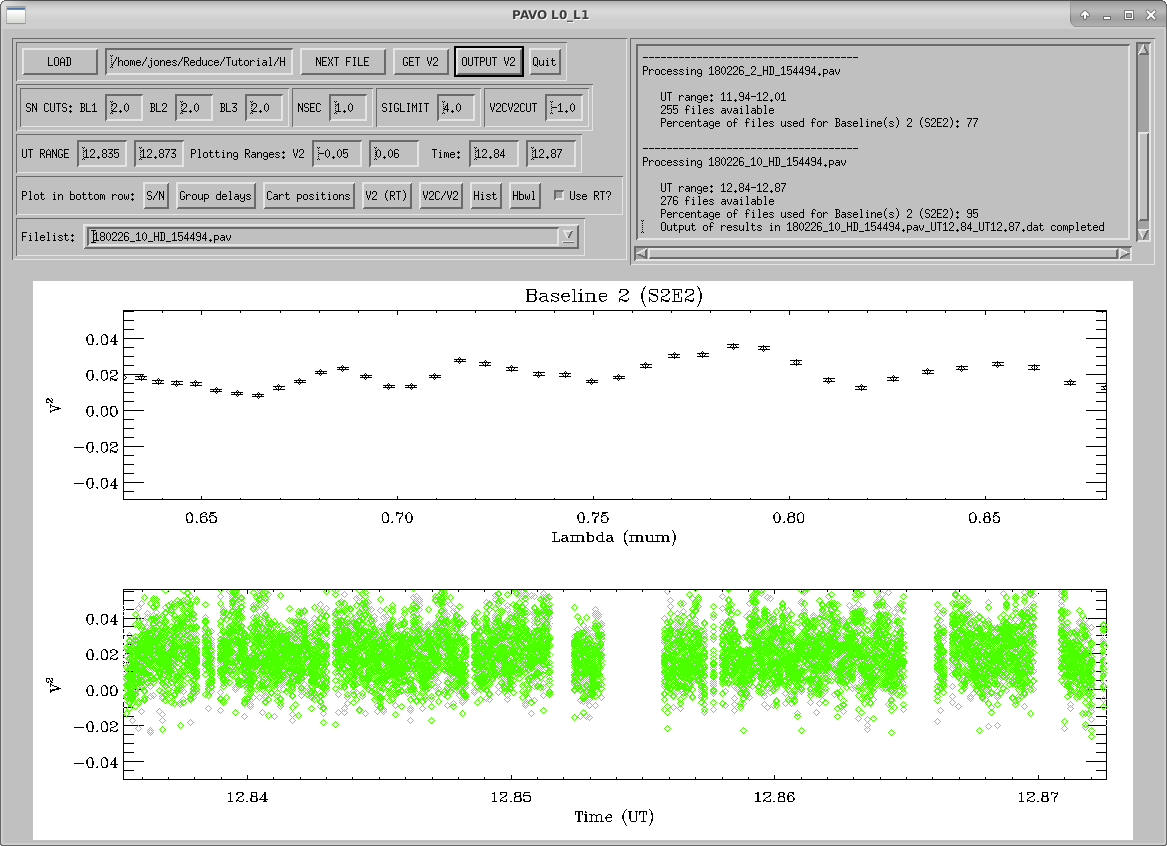 Press NEXT FILE to start on the next .pav file and repeat the process with GET V2, OUTPUT V2, and NEXT FILE until all files have been reduced, at which point, the program will end.

Note: If you are adjusting outlier rejection criteria, it is a good idea to use a single set of criteria for the entire night (rather than adjusting them star-by-star) in order to avoid bias in your calibration. Ideally, you shouldn’t have to adjust anything, and simply use the graphical inspection to decide which scans are useful for calibration and which are not.

This program calibrates the level 1 visibility data that was reduced by l0_l1_gui.pro. This includes multi-bracket calibration and uncertainty calculations using Monte-Carlo simulations. Before running l1_l2_gui, you must create the following two files: 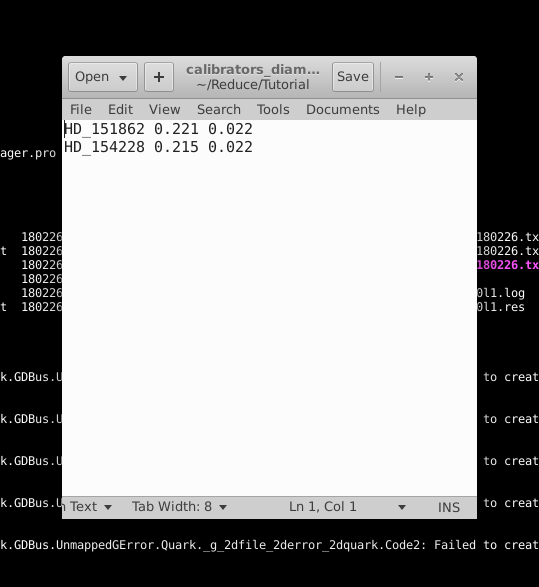 Create a configuration file (in our example, this file is called HD_154494.config) in the following format:

Note: Two common scenarios that will cause l1_l2_gui to crash are:

To start the GUI, enter the IDL environment with pavo_idl and start the GUI with l1_l2_gui.
Click INPUT FILE to select the results from l0_l1_gui (in our example, this is HD154494.list_l0l1.res). The first time you load this input file, l1_l2_gui will search for the stars’ coordinates using querysimbad to calculate projected baselines, which will take a few seconds per star. It will display this information in the window on the upper right of the GUI and it will save the information in an IDL savefile (in our example, this is called HD_154494.list_l0l1.res.idl) so you won’t have to wait as long when you load the results file in the future. 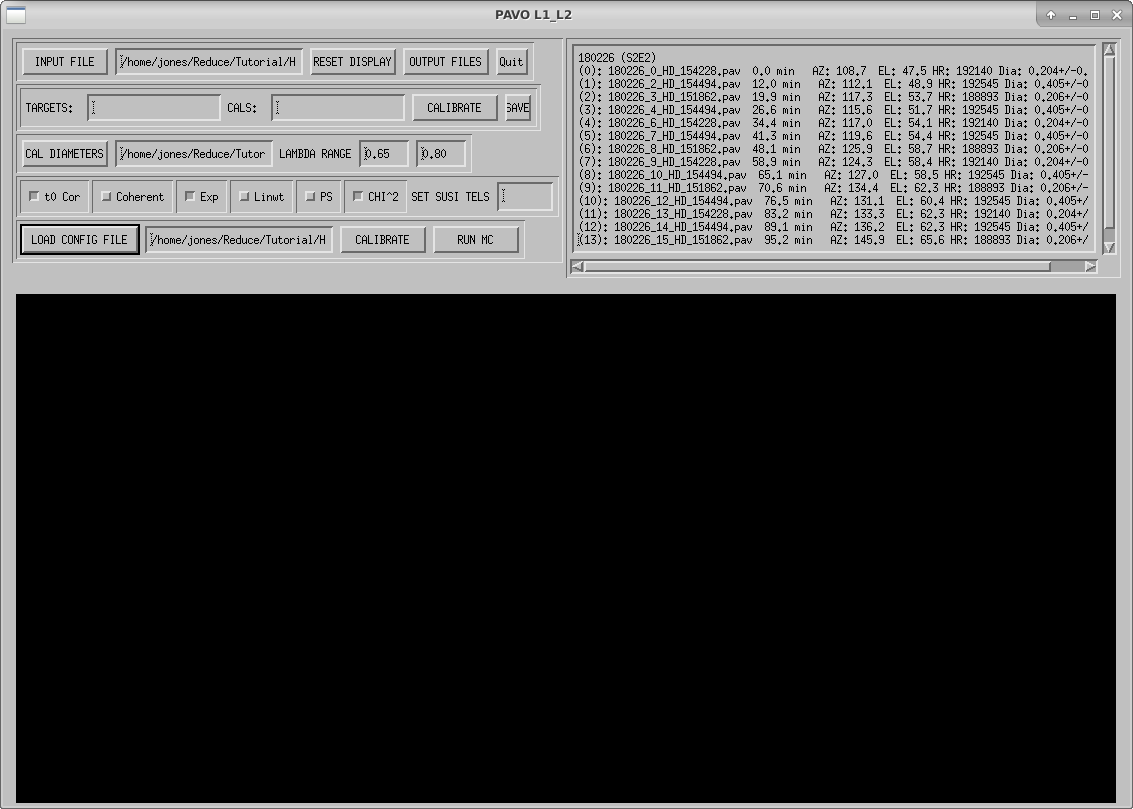 To calibrate your data in the manner listed in your configuration file, click the CALIBRATE button on the bottom row. If you wish to calibrate individual targets, you can input the target and calibrator indices in the TARGETS: and CALS: text boxes. These indices are the numbers in parentheses preceding the star information in the window in the upper right corner. This can be useful for identifying bad calibrators by calibrating them against each other.

The following options can be set using either calibration method:

The CALIBRATE button will also perform a least squares fit of a limb-darkened disk to the visibility curve. 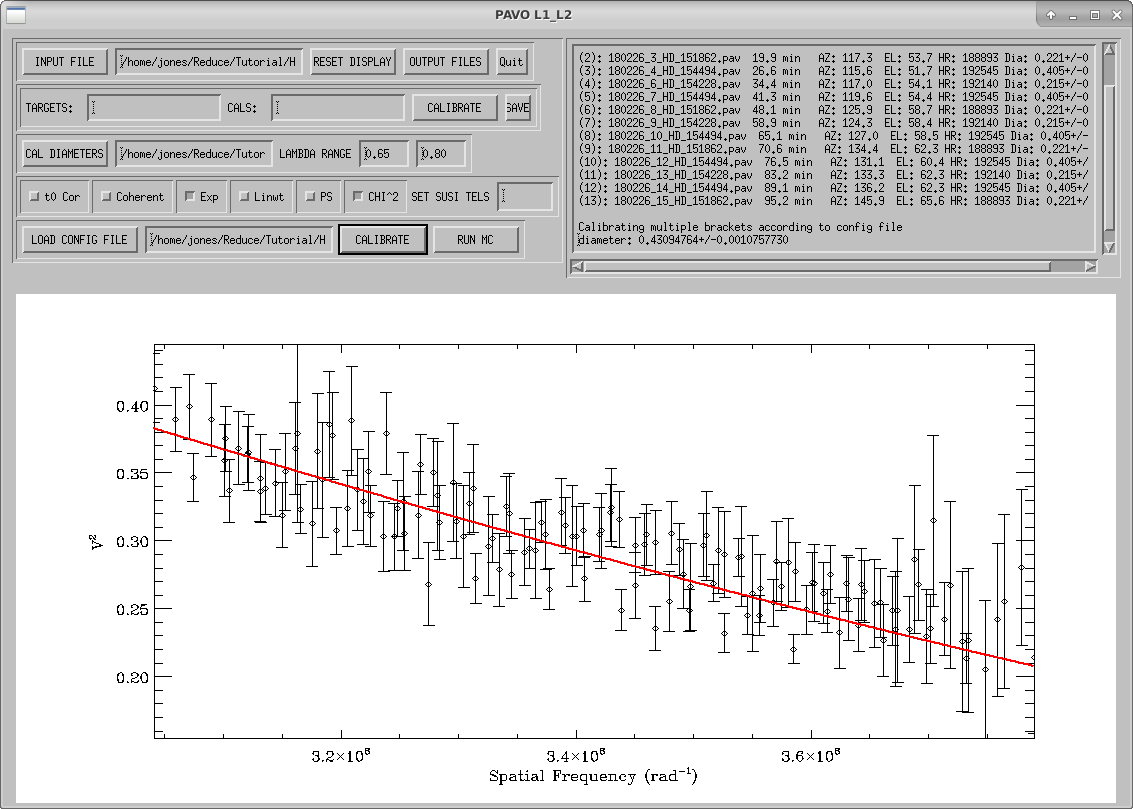 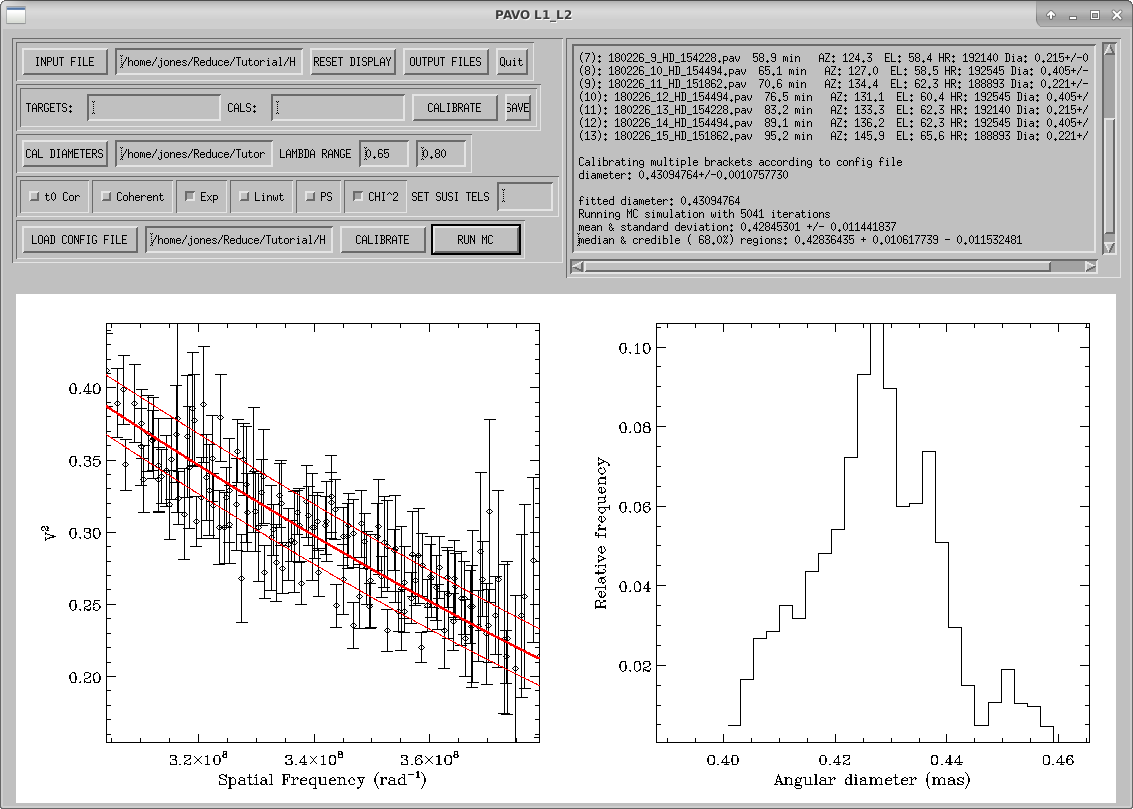 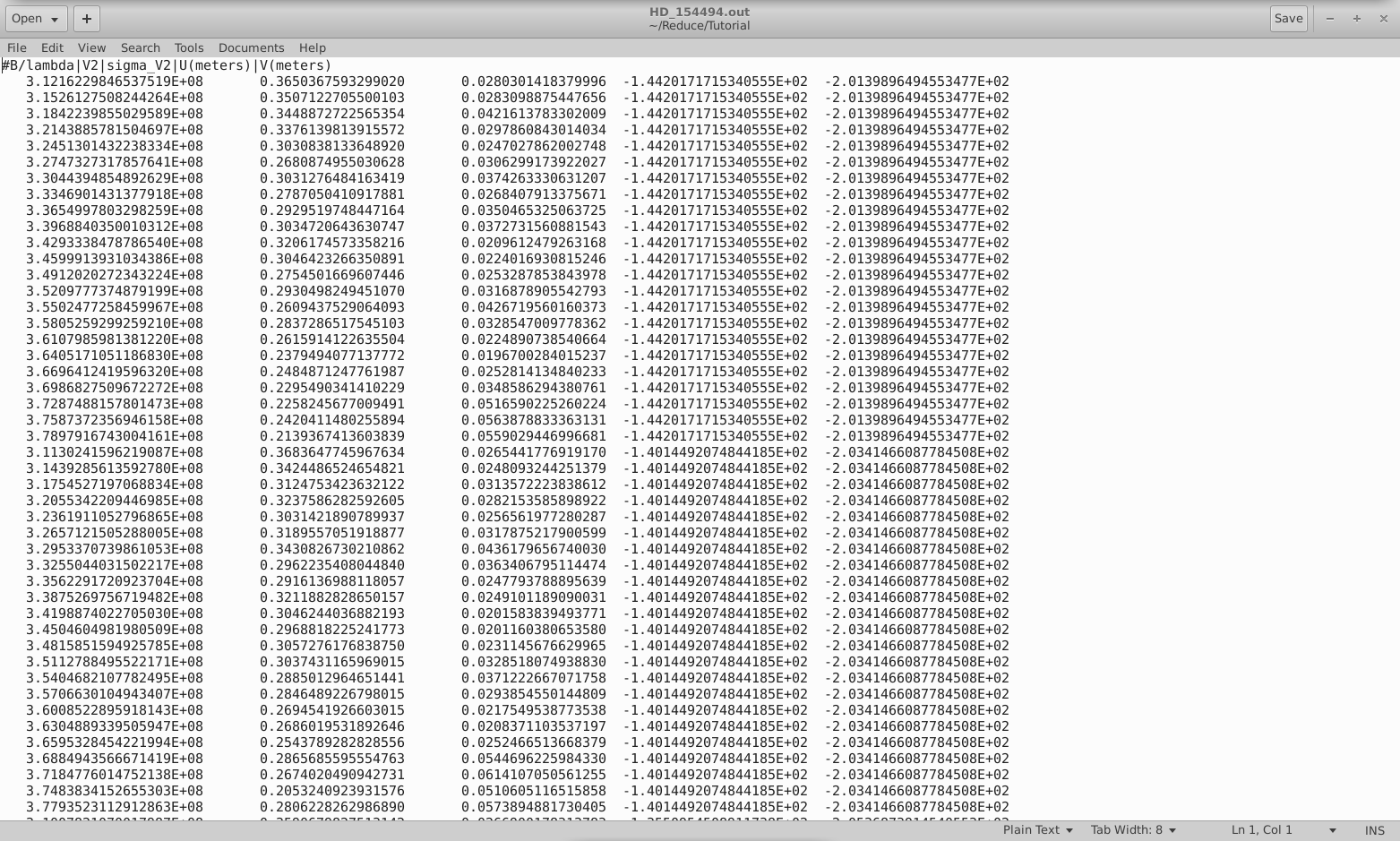 Converting Results to the OIFITS format